This is Nick the guest blogger with a quick one. Last week while in South Dakota I took the kids to Wind Cave National Park. Mind you, I like my nature natural and the word ‘tour’ makes my eyes glaze over whilst memories of terrible boredom on school trips rise unbidden to my mind. But, if you have the chance to look around one of the largest caves in the world (maybe even the largest if the theoretical connection to Jewel Cave is found) you take it how you can get it. We really wanted to try the candlelight tour, but when we got to the park at 4 (I had to work until 3) only the tamer tours were available, so off we went with the precocious younglings and retirees.

In a word, Wind Cave is impressive. It’s geologically boring, but so big that it can’t fail to make an impression. 140 or so miles have been discovered and mapped and about 2 miles are added every year. The Park Service estimates that between 5 and 50 percent of the cave is known based on measurements of the air flow exiting the cave mouth via barometric pressure. The map shows a jumbled mess of criss-crossed passages made all the more confusing by virtue of being stacked on top of each other under a single square mile of surface. The original explorer, Alvin McDonald, mapped a mere 10 miles of cave but did it with only candles and string.

I’m not including a lot of pictures here because it’s impossible to gauge the scale and complexity. Here are a few anyways. 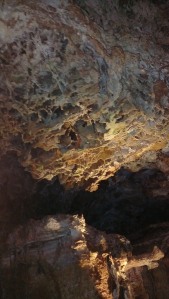 Whether you’re a nature snob like me or a seasoned tourist, I highly recommend having a look at Wind Cave. The sheer vastness and grandeur of the cave is worth it and the rangers do a great job of making it interesting and informative.